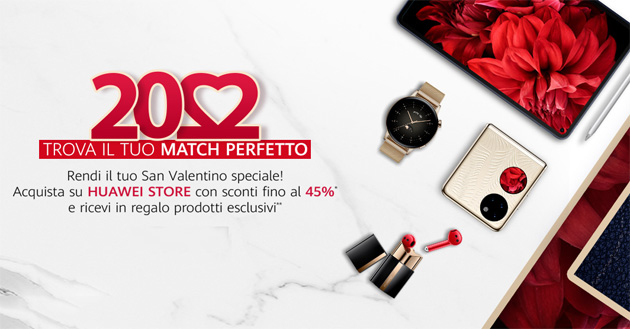 Huawei celebrates this year’s lover’s day with the “Find your perfect match” campaign, which includes promotions on the products of the Chinese brand’s ecosystem, with discounts of up to 45% on the Huawei Store on smartphones, wearables, audio devices, monitor, pc and tablet.

All the latest news signed Huawei announced in Italy on January 26 they are all on offer at launch cost. The foldable smartphone Huawei P50 Pocket in the Premium Gold color it is available at 1,599.90 euros with a free Huawei FreeBuds Lipstick and 12 months free screen replacement warranty. The smartphone Huawei P50 Pro with Dual-Matrix camera system and Huawei XD optics you can buy it at a price of 1199.90 euros with a gift Huawei FreeBuds Pro and 12 months free screen replacement warranty. For sportsmen and especially runners, the running smartwatch Huawei Watch GT Runner is offered at the price of 299.90 euros with free Huawei FreeBuds 4i and an extra strap. Finally, the portable smart speaker Huawei Sound Joy with Devialet technology is available at 129 euros instead of 149.90 euros (and with 70 euros more you can receive a second Sound Joy).

The curved monitor 34-inch MateView GT with Soundbar is offered at a price of 499.90 euros instead of 549.00 euros with the new speaker Huawei Sound Joy as a gift.

All the promotions and initiatives of Huawei for Valentine’s Day 2022 can be found at consumer.huawei.com/it/offer/san-valentino/

For technology lovers, on the occasion of the lovers’ party, the Oppo brand this year launches “Charm Limited Edition Lola”By Chiara Costacurta jewelry, a capsule collection by phone charms – of ‘smartphone bracelets’ – entirely dedicated to the latest Reno6 series. At the heart of each collection is one butterflyhand-enamelled, a symbol associated with female beauty as well as a hymn to not fear changes

For the occasion, Oppo inaugurates the concept “Stories of Women powered by Oppo” for “enhance the uniqueness of each woman by enhancing their creations”.

“The capsule collection created with Chiara Costacurta is the first chapter of ‘Stories of Women powered by Oppo’, a wide-ranging project with which we want to give space to the work of young women, enhancing their creations and making our technology available to them. . A single accessory, like in this case the phone strap collection, shows us once again how fashion and technology are not two distant universes and how the latter can be declined as a form of style. We want to continue to cultivate this openness to the fashion world, giving space to the work of talented young women and surfing the new trends, to meet the needs of a young and style-conscious audience. ” said Isabella Lazzini, Chief Marketing Officer Oppo Italia.

Oppo has planned to give one of the 3 types of charms available – in the Black, Blue and Bronze colors – to all those who purchase an Oppo Reno6 or Reno6 Pro smartphone between 1 and 14 February 2022 on its eStore, where they can be found at the recommended price of 399.99 euros and 649.99 euros respectively.

The LookBook San Valentino 2022 by Oppo 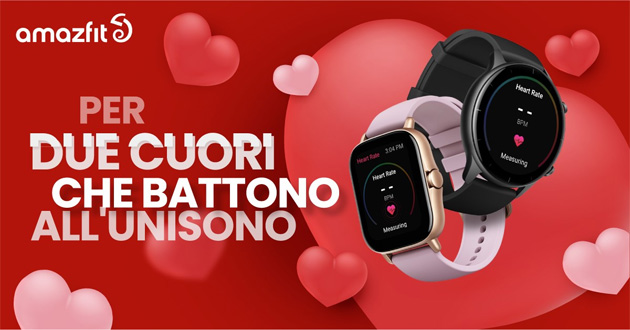 For this year’s party of lovers, Amazfit has decided to propose two special bundles in a limited offer for San Velentino that allow you to buy two wearables of the brand at a special price, which can be purchased on the brand’s e-commerce site (it.amazfit.com / pages / valentines-sale) and on Amazon.co.uk.

Amazfit has thought of these bundles in response to what has been shown by a recent study published by Prochazkova, according to which physiological synchrony is associated with attraction, which means that love is felt by two hearts beating together in synchrony. The study has in fact highlighted how already during a first meeting it is possible to identify the attraction for the partner through physical signals such as redness of the skin and heartbeat, which in fact tend to synchronize with that of the person in whom one is interested.

The first bundle proposed by Amazfit includes smartwatches GTR 2e and GTS 2e. The GTR 2e model, designed for him, offers health monitoring, 90 integrated sports modes and water resistance up to 5 ATM. The model made for her, GTS 2e, has an elegant design that adapts to any look, has the same sport modes and functions as the GTR 2e model as well as having an extended battery life. The bundle is offered at a price of 189.9 euros until February 14. Here all the specifications and the comparison between GTR 2e and GTS 2e.

The second bundle is called “Timeless Love” and includes the smartwatch GTR 2 Sport for him, a device with classic lines that offers complete health and fitness tracking with an ultra-long battery life of 14 days and the ability to store and play their favorite songs. For her, however, the bundle includes the model GTS 2 mini, sleek and lightweight smartwatch with over 70 sports modes, heart rate, stress and SpO2 monitoring. This bundle is offered at a price of 199.9 euros until February 14.

For couples who like to keep fit and monitor their health without sacrificing style, you can also take advantage of the party of lovers to discover the functions of the new Amazfit GTR 3 Pro and GTS 3a pair of smartwatches with advanced functions and elegant looks.

On Amazon.it it was opened THIS page that collectson the occasion of Valentine’s Day, promotions on many products, including the Echo and Fire TV families of Amazon. 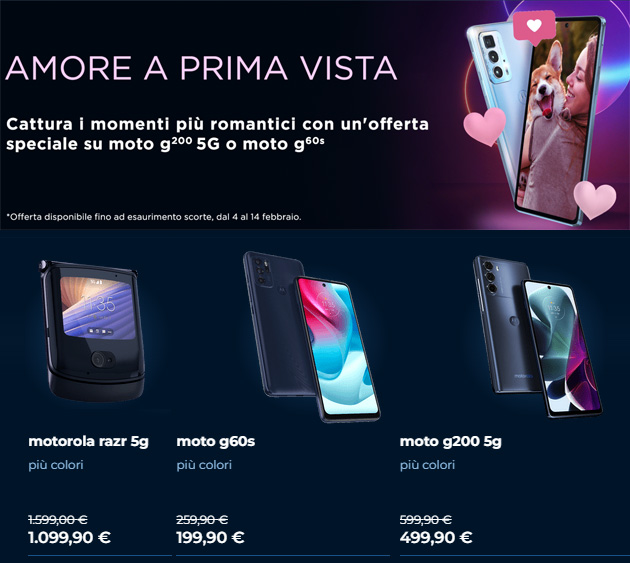