We have talked about Samsung’s new reference smartphones by now in all sorts of ways: in recent days we have seen an unprecedented image, but also the list prices and how they should hold up over time.

Today is the usual Roland Quandt to confirm an interesting technical detail of the most premium model of the series: according to the leaker, Samsung Galaxy S22 Ultra it will really also be proposed in a memory cut from 1 TBhowever, there is a “but” to be taken into account: this version of the smartphone will be marketed only in some marketstherefore it is not sure, but it is probable that we will also see it in our part.

The information, thanks to the aforementioned clarification, is perfectly compatible with the infographic that emerged a few days ago, in which the 1 TB cut did not appear.

It would not be an absolute first time for Samsung, which already in 2019 had pushed to the 1 TB cut – complete with 12 GB of RAM – with Samsung Galaxy S10 +. In the case of the Galaxy S22 Ultra, 1 TB of storage should be paired with a whopping 16 GB of RAM.

It is not the first time that we have talked about official accessories coming with the Galaxy S22 series, but here the attention will be all for Samsung Galaxy S22 Ultra.

A complete gallery of high quality images – these are most likely official press images and come from the usual @evleaks (Evan Blass) – shows us some covers that (barring denials) will accompany the launch of the smartphone called to merge the spirit of the Galaxy S series with that of the iconic Galaxy Note series.

In total eight models are shown: four simple in silicone, two with an eye-catching strap and two with kickstand. Let’s get to know them better.

The cover with the stand, officially known as Protective Standing Coveris depicted in the two dark blue and white colors. This is obviously a rugged type case, even certified according to the MIL-STD-810G Transit Drop standard (protects the smartphone from damage resulting from drops up to 1.5 meters on steel surfaces at temperatures of 15-35˚C) . The clip-on stand allows you to choose between two different positions, 45˚ and 60˚, for an always comfortable viewing angle. The clips are even interchangeable: Samsung supplies two with each cover in different colors, one in contrast and one in the same color as the housing: in the case of the dark blue cover, the extra stand is gray; with the white cover instead it is light green.

Samsung will also introduce a transparent model, called Clear Standing Cover without military certification but equipped with a kickstand positioned horizontally instead of vertically as in the previous case. 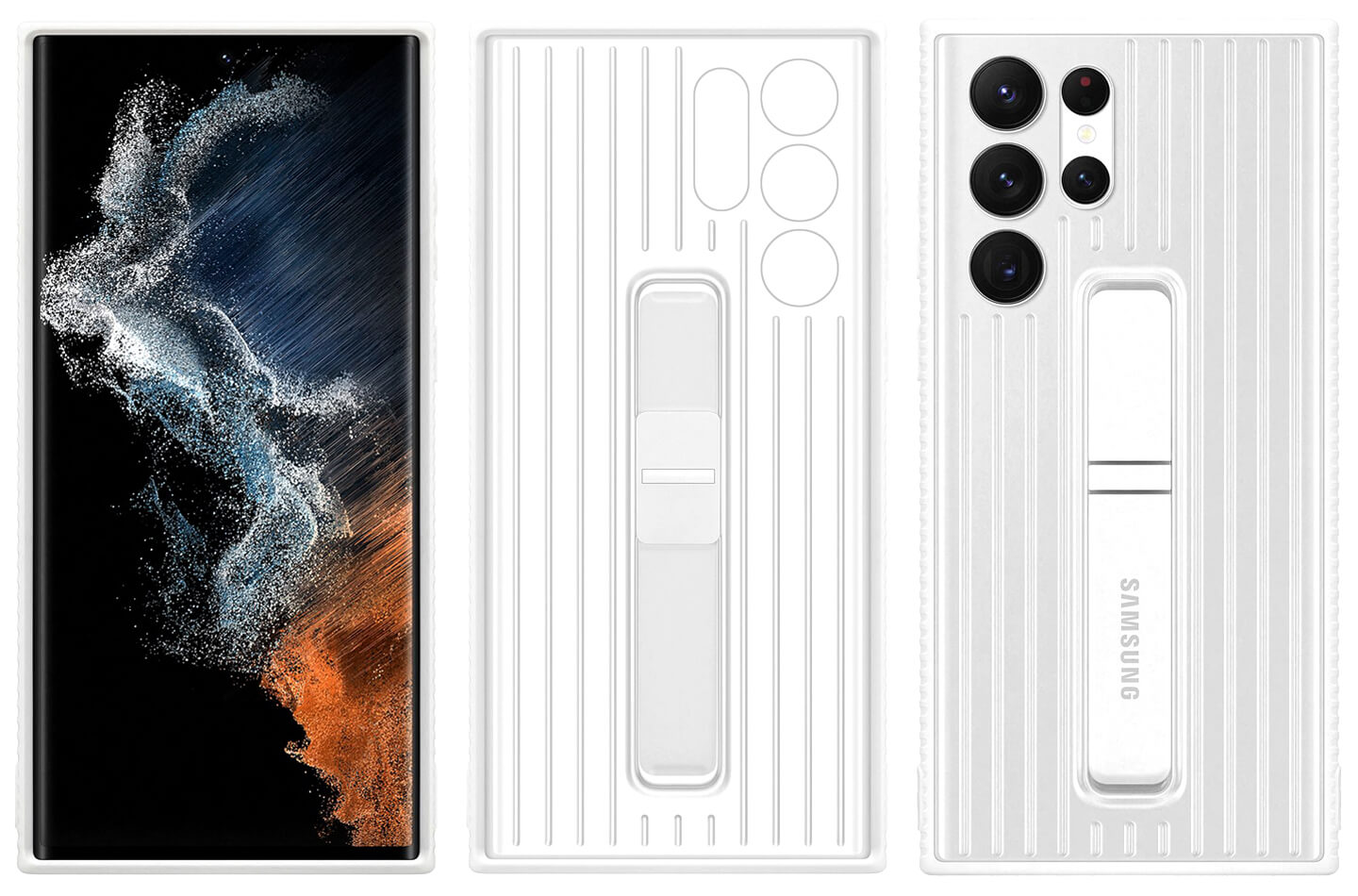 The strap is elastic and with contrasting colors, take a look below. There is talk of prices around 40 euros for the Silicone Cover with strap and about 30 euros for the slim version. 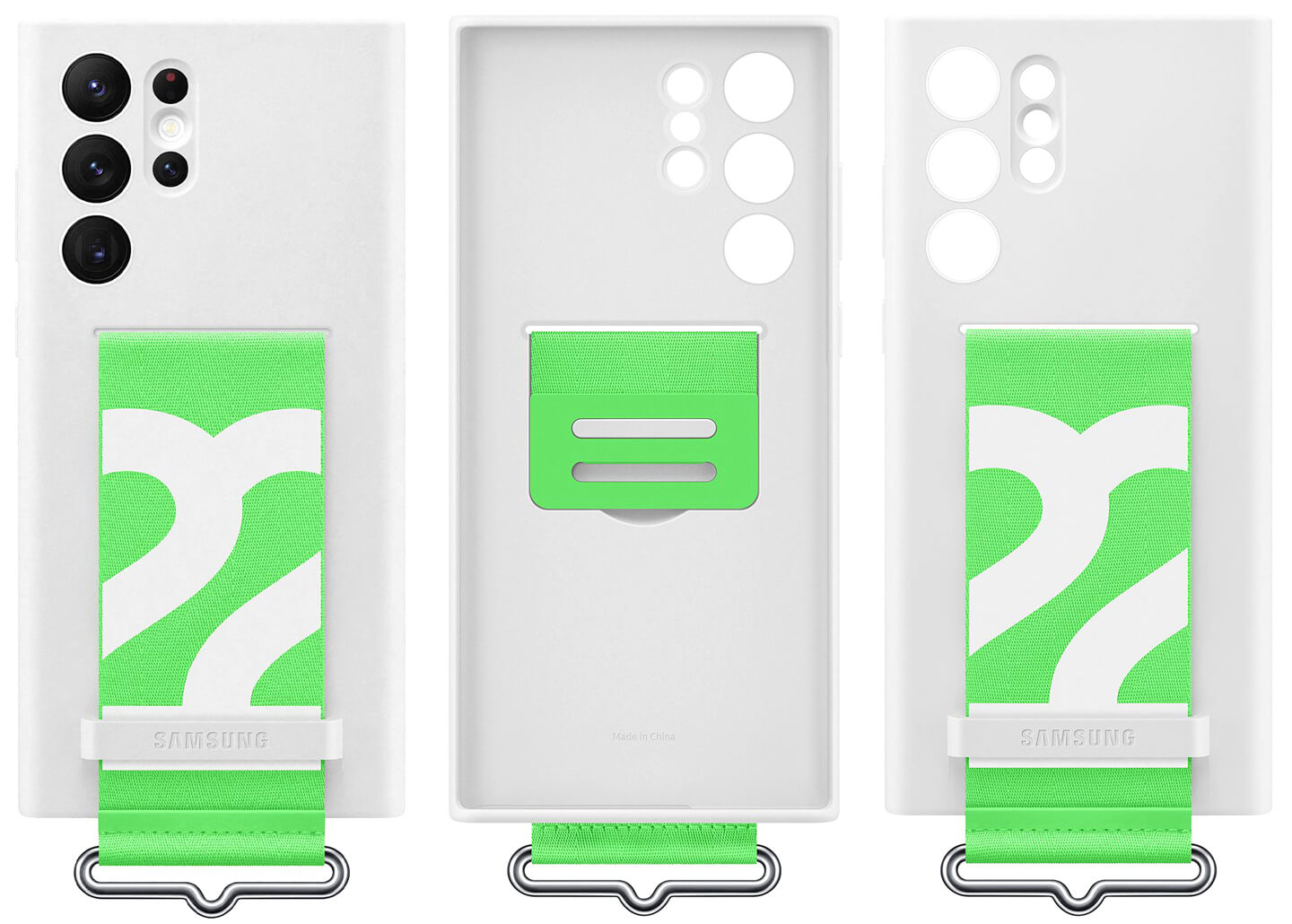 For users looking for something simpler and more sober, there will be no shortage of classics Silicone Cover in the colors light purple, light green, dark purple (Burgundy) and black, to match the colors of Galaxy S22 Ultra (Phantom Black, White, Burgundy, Green).

Also in this case, prices should be around 30 euros.

In all likelihood, however, Samsung will also offer other classic models such as the Smart Clear View Cover and Smart LED View Cover flip covers, leather covers and Kvadrat.

As we explained to you in our Samsung Galaxy S22 series rumors report, the S22 + And S22 Ultra will most likely support fast charging a 45 W. To take advantage of this feature, Samsung will also list a new 45W fast charger, which will cost 50 euros.

Read also: Samsung Galaxy S22 and Tab S8 as if they were official: only the announcement is missing