Whatsapp has been offering end-to-end encryption by default for messages for five years now, now protecting over 100 billion messages a day exchanged between over 2 billion people. WhatsApp announced on October 15, 2021 that it has introduced end-to-end encryption also for chat backups. This means that no one, other than the owner of the account who activated this additional level of security, can restore the conversations, not even Whatsapp itself.

“End-to-end encrypted backups for WhatsApp start rolling out today” CEO Mark Zuckerberg shared on Facebook on the afternoon of October 15. “Proud of the team for continuing to lead security for your private conversations.”

Although messages exchanged between users have long been secure thanks to end-to-end encryption, this has not until now been available for chat backups that users can store on Google Drive or iCloud for, for example, be able to transfer conversations to the new phone or to retrieve them if the phone is lost.

“No other messaging service of our reach provides such a level of security for messages, multimedia content, voice messages, video calls and backups of their users’ chats.” commented Whatsapp on his blog. “Since WhatsApp is used by more than 2 billion users, it is essential for us to be able to provide more and more tools to protect their privacy,” added the company.

The function that allows you to encrypt backups of Whatsapp chats is in distribution since October 15, 2021 with gradual availability for users who use the most recent version of WhatsApp. Once the app on your phone has received this functionality, you will find a new in-app tool (‘End-to-end encrypted backup’ in Settings> Chats> Chat backup) that will allow you to choose a password or key. 64-digit encryption to use to protect the backups of your chats: neither WhatsApp nor backup service providers will be able to read the backups or access the key set to unlock them. Of course, when you go to restore an end-to-end encrypted backup (for example, when you switch phones) you will need to remember the password or key you set in order to unlock the backup, otherwise the chats will not be restored. 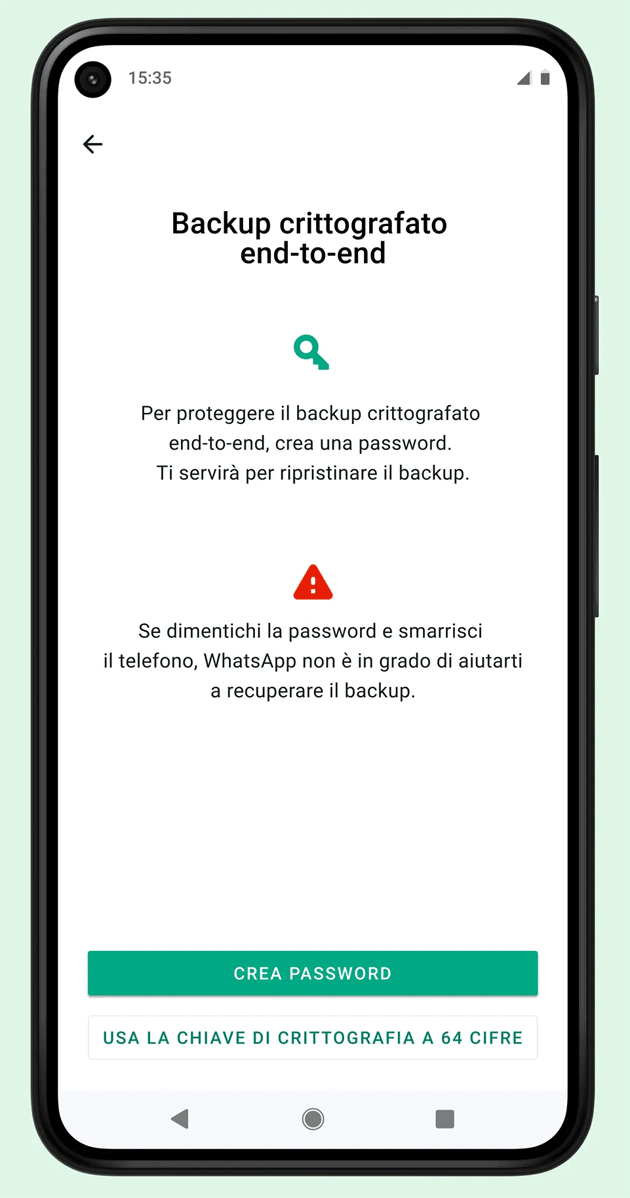 How to activate end-to-end encrypted backup in Whatsapp:

• Open Settings.
• Tap Chats> Chat Backup> End-to-End Encrypted Backup.
• Tap Continue, then follow the prompts to create a password or key.
• Tap Done, and wait for WhatsApp to prepare the end-to-end encrypted backup. You may need to connect to a power source.

How to Disable End-to-End Encrypted Backup in Whatsapp:
• Open Settings.
• Tap Chats> Chat Backup> End-to-End Encrypted Backup.
• Tap Deactivate.
• Enter the password.
• Confirm that you want to disable end-to-end backup by tapping Disable (you will be prompted to enter the password or key you set when you activated the feature or by authenticating with your device’s biometric data or PIN).

Device-level backup to iPhone
IPhone owners who have turned on iCloud backup for their entire iPhone, iCloud can find the backup of an unencrypted version of the chat. To ensure that WhatsApp chats and media files are backed up only with end-to-end encryption, turn off iCloud Backup on your device.