Google Maps is one of the most powerful and versatile weapons in the boundless arsenal of the Mountain View giant and among its functions not to be underestimated there are also the reviewswhich – above all thanks to the precious contribution of local guides – can prove to be particularly useful when visiting a new place.

Now Google wanted to explain the how Google Maps reviews work through the words of Ian LeaderProduct Lead of User Generated Content (UGC): “With millions of reviews posted every day by people around the world, our support team works tirelessly to make sure that information on Google is always relevant and accurate. […] Much of our work to prevent inappropriate content from being posted happens behind the scenes […]”.

First, to ensure that the reviews posted on Google Maps rely on real experiences and to avoid the publication of offensive and irrelevant comments, which would damage the activities on Google, Big G has compiled a list of content rules. Of course these norms cannot be crystallized, but they must evolve to keep pace with the surrounding reality.

Google takes the example of the anti vaccine COVID-19 and of certifications that the Government has imposed for access to certain categories of activities: in this situation it was necessary further protect the assets from the publication of off-topic content, from spam and from critical reviews for the application of the provisions relating to the vaccination obligation and so on.

Of course, the creation of a rule of conduct is not in itself sufficient: it must be ensured that it is applied. For this reason, once a new standard has been drafted, the Big G team must prepare the related educational material, which is used by both Google operators and machine learning algorithms. This material serves as an aid to recognizing content that violates the rules and to ensure that reviews remain «useful and authentic“.

Moderation entrusted to machine learning (but not only)

Since we’re talking about Google and one of its most powerful services, it’s hardly a surprise to read that moderation content – in this case reviews – takes place by exploiting the full power of machine learning.

As illustrated by Mountain View, every time a user posts a new review on Maps, the same is sent to the Google moderation system that deals with verify compliance with the rules. The boundless amount of reviews that are continually published would make it practically impossible to entrust this control function to human work alone, which is why Google adopts a mixed approach which allows you to exploit different strengths: machine learning operates on a large scale, while the human contribution guarantees greater attention “to the nuances of each content“.

The bulk of the work is done by machines: Machine Learning schemes are more than enough – says Google – to identify and remove most of the false and fraudulent content even before it reaches the eyes of other users. In this regard Big G lists the different angles from which the reviews are analyzed by the machines:

Training machine learning systems is a potentially delicate operation, especially when it comes to correctly contextualize certain words to distinguish offensive and / or discriminatory content from acceptable and positive content. Another type of control concerns the detection of questionable patterns, which can be various and include, for example, groups of people “leaving reviews on the same set of business profiles to a place or business that receives an unusually high number of 1 or 5 star reviews in a short period of time“.

Google promises maximum commitment from the team of human operators to identify potential risks of abuse, thus opting for the path of prevention through the proactive application of protective measures.

The improvement of the user experience also passes by the users, for this reason the reviews considered in contrast with the Google rules can be reported at this link by the users and at this link by the companies. Reports are examined by human operators, who remove those in violation of the rules and can even go as far as suspending accounts and initiating disputes. 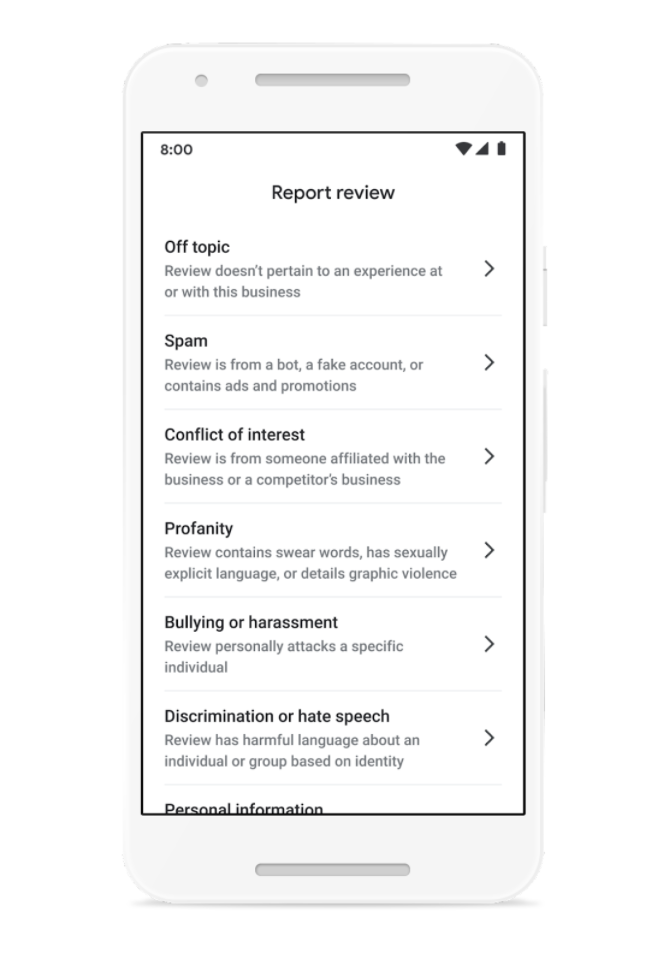 The latest version of Google Maps for Android it can be downloaded from the Play Store using the badge below.

Read also: Google Pixel 6 and Pixel 6 Pro in Italy: available from today on the Google Store