Google Chrome receives the first update of the new year: in the beta channel the version 98, which introduces some interesting ones improvements for emojis and PWAs (Progressive Web App) and anticipates other news that will be implemented only at a later time (touch screenshots and privacy).

Google Chrome Beta 98: the news of the update

The emoji they are practically everywhere on the Net, but they still create some difficulties to be saved as a font without taking up much more space than the textual component. With Chrome 98, and more precisely through COLRv1 Color Gradient Vector Font, Google aims to change the cards on the table: this font format makes 2D glyph definitions possible, supports variations and allows you to reuse existing parts. In fact, the Google team started having regard to the vector-based SVG image file that saves shapes and outlines instead of pixels, and then makes subsequent improvements.

The advantages brought by the format COLRv1 will affect both the size of the files, which can be significantly reduced, and the quality of the emoji itself, which in this way will obtain a higher definition than the current bitmap fonts, with particular advantages for larger emojis.

The screenshot shown already allows you to get an idea of ​​the visual improvement, however you can better appreciate it by visiting this link.

How PWAs improve on desktop

The PWA are undeniably a great convenience and, as a result of the new Google Chrome beta update, those installed on the desktop are now able to show content also inside the top bar, such as search bars, navigation keys and so on.

This novelty had been talked about for the first time in Chrome 93, but now it is finally more appreciable in Chrome 98.

As with the previous improvement, you can see it in the following screenshot or appreciate it firsthand a this link.

Also in this case we are talking about a not entirely new novelty, started as an experiment with Chrome 94 and now available with Chrome 98. Web developers can use CSS to understand if the screens on which their websites are displayed support the HDR content. A change that is useful in light of the growing popularity of such panels.

The Google team is preparing a new one Privacy Guide to be entered in Chrome Settings to help users understand which ones to best modify (and with what effects) to protect their privacy.

Naturally, by doing so, Big G will encourage users to share more data in order to make certain improvements in the browsing experience possible (such as faster uploads by pre-loading websites or synchronizing their history to access them. across multiple platforms).

It is already possible to activate the relative flag (chrome: // flags # privacy-review), however at the moment it does not make any changes.

News for desktop screenshots and more

Google Chrome Beta 98 ​​lays the foundation for a very interesting improvement for the screenshot on desktop: the next introduction of one integrated tool for capturing and editing of the same directly on the Google browser.

At present, the function it is still hidden behind flags and does not properly perform its duty (it crashes trying to save the screenshots on the pc), however it already demonstrates the direction in which Big G wants to move. On the other hand, for less savvy users it could be extremely useful to have a “Screenshot” button always at your fingertips while browsing. 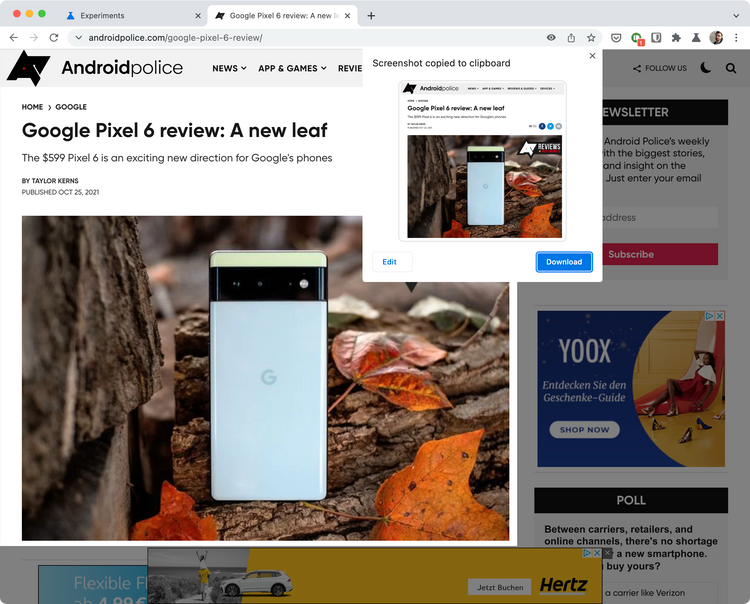 Speaking of flags, Chrome 98 also uses them to enable the adding emojis to screenshots captured on android devices. Up until now, the editing possibilities included drawing and adding text, thus also allowing you to select emojis. However, the dedicated option offers more customization, allowing you to resize, move and rotate the stickers.

How to update Google Chrome Beta for Android

The 98 version of Google Chrome Beta for Android can already be downloaded from the Google Play Store by clicking on the badge below. For the desktop version, just visit the official site.