OPPO’s ColorOS interface has improved greatly in recent times, especially with the recent one ColorOS 12 which got numerous features. It is therefore no coincidence that this Android interface now has over 500 million monthly active users globally.

Through the ColorOS Twitter account, OPPO yesterday thanked the more than 500 million users worldwide who use its interface, despite the fact that smartphone shipments fell by 2% last year.

OPPO has managed to overtake other Chinese competitors, and the ColorOS user base is set to grow this year as the company launches a couple of major smartphones.

On February 24, the presentation in China of the OPPO Find X5 series is scheduled, moreover it is very likely that the company will also launch other unreleased products during the event.

OPPO could launch TWS tablets, smartwatches and headphones together with OPPO Find X5

A seemingly official new poster suggests more products will be launched on February 24. The teaser comes from OPPO’s official Weibo account and suggests the launch of a couple of true wireless headphonesa new smartwatch and a tablet. 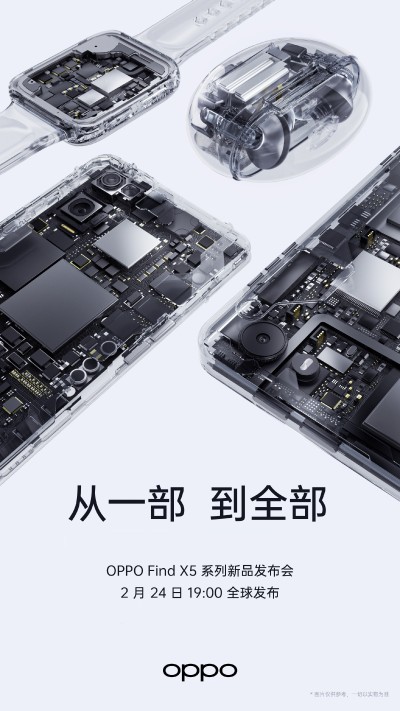 An alleged OPPO tablet has been rumored since November, while the TWS headphones are probably the Enco X2 leaked in January. Not much is known about the smartwatch at the moment, however it could be a successor to the OPPO Watch 2 launched last year.

Less than a week after launch, it is likely that more details about these products will pop up in the next few days.

Read also: Best OPPO smartphones the ranking of the month