Among the innovations announced by Apple during the opening keynote of the WWDC21on June 7, there was a preview of WatchOS 8the version of the Apple Watch smartwatch operating system from the same day made available to developers and that from 20 September it is publicly available for all users of Apple Watch Series 3 or later paired with iPhone 6s or later with iOS 15, as announced by Apple at the event held on September 14th. watchOS 8 comes with new features designed to help users stay healthier, active and connected.

“Apple Watch is the world’s most loved watch that keeps users healthy, active and connected,” said Kevin Lynch, Apple’s vice president of Technology. “With watchOS 8, we are offering more convenient access to the places where users live, work and visit with meaningful updates to Home and Wallet, expanding support for both physical and mental wellbeing and enabling richer personal connections with the new watch face. Portraits and Messages updates. ” 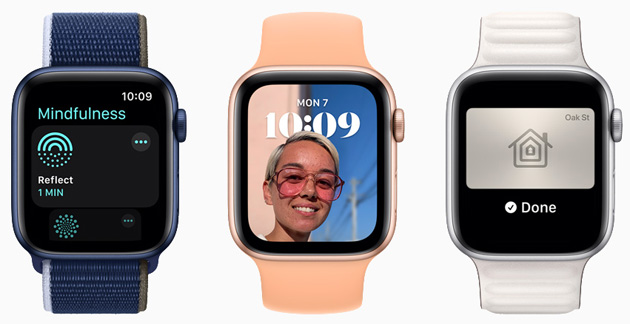 With Apple Watch, it has long been possible to use Apple Pay and Wallet to make secure, contactless payments in stores or when taking public transport. With watchOS 8, Wallet introduces new, more powerful contactless ways to access places and things. After being first announced at the WWDC in 2020debuts this year on the Apple Watch Series 6 on support for Ultra Wideband for digital car keys. This means that Apple Watch Series 6 users will be able to safely unlock their car (if compatible) remotely and start it from the driver’s seat only by wearing the watch. From this fall, it will also be possible to add home, office and hotel keys to the Wallet and unlock everything from your Apple Watch. By the end of the year, you will be able to add your driver’s license or other identity documents to your Wallet in the United States.

Wallet on Apple Watch with WatchOS 8 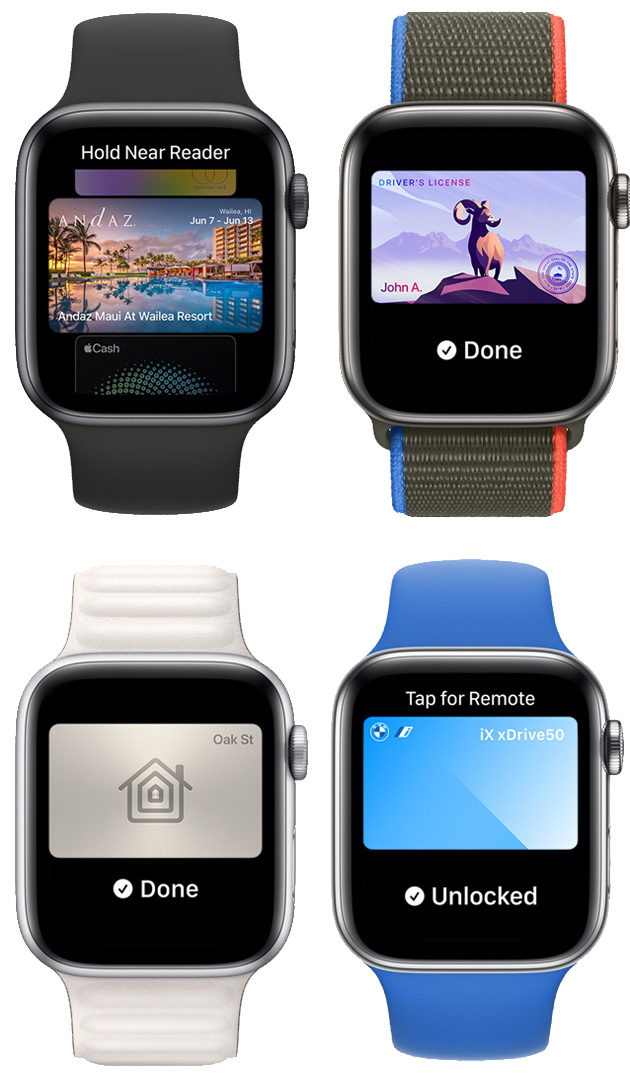 WatchOS 8 comes with theRedesigned Home app to offer more convenient access to devices and scenes of interest at a given time, also allowing the control of room accessories directly from the clock. If a camera has been configured in HomeKit, directly on the clock display it is possible to see who is at the door in live-streaming, also being able to press the microphone button to talk to whoever is in front of the camera (if this supports communication two-way). Apple Watch users can also tap the button Intercom to quickly broadcast a message throughout your home or individual rooms via HomePod, HomePod mini or other personal devices. 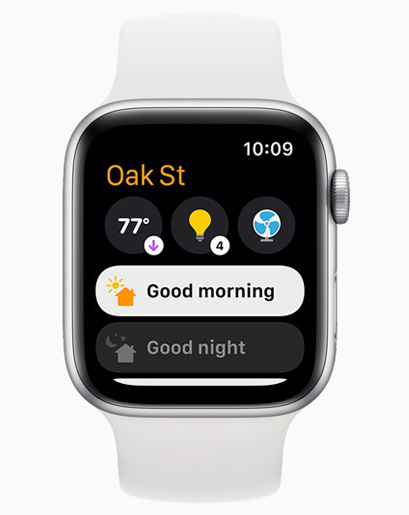 Apple Watch with watchOS 8 allows you to tap Intercom to quickly broadcast a message throughout the house or individual rooms via HomePod, HomePod mini or other personal devices
The Home app in watchOS 8 provides convenient access to accessories and scenes that may be needed at any given time 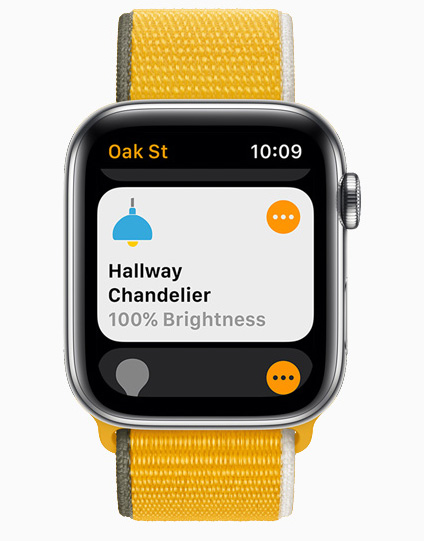 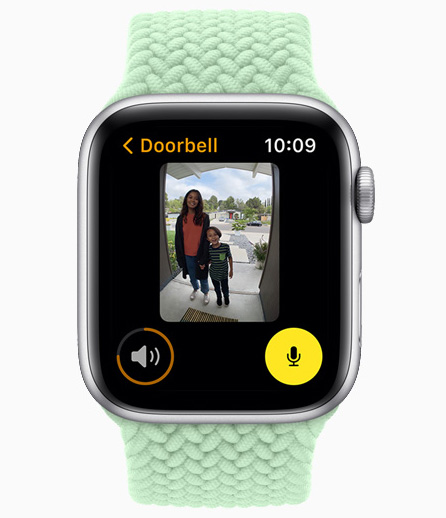 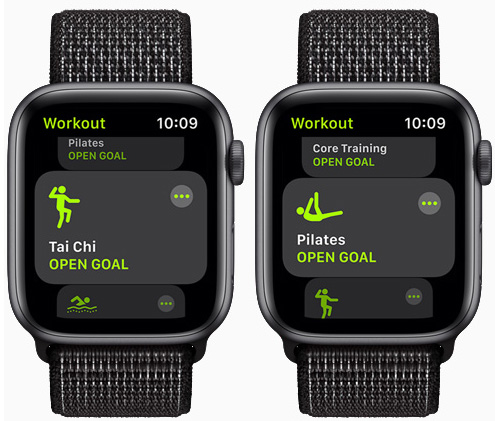 Now more than ever, people are recognizing the importance of finding small moments in their day to be more aware of their wellbeing and health. In watchOS 8, The Breathing app (Breathe) becomes the Mindfulness app, with an improved experience, plus a new type of Reflect session. This allows you to concentrate for a minimum of one minute, anywhere and anytime. Each Reflect session welcomes you with a unique and thoughtful notion to consider that invites you to a positive state of mind. For example, you might see something like “Remember a time you recently felt a sense of calm. Bring that feeling into this moment.” or “Think about something you are grateful for and think about why you appreciate it so much”. Both the Breathe and Reflect experiences also offer tips to help get more out of each session and feature new animations.

Today, Apple Watch helps you reach your sleep goals by establishing a bedtime routine and tracks metrics like sleep time, heart rate, and blood oxygen levels. watchOS 8 offers even more insight into your general well-being, if you can monitor breathing rate during sleepor the number of breaths per minute. To do this, Apple Watch uses the built-in accelerometer to measure breathing rate during sleep, and this information can be viewed, along with trends over time, in the Health app on the iPhone. This metric is also available to developers via HealthKit (with permission from the user). 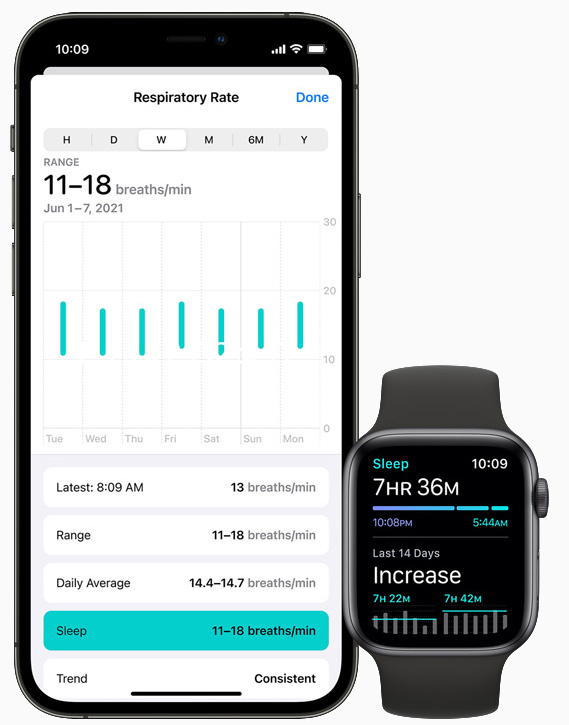 The Photo face is the most popular Apple Watch face, and watchOS 8 introduces new ways to view and interact with your favorite photos right from your wrist. The new Portraits dial gives life to portraits made on the iPhone with an engaging and multi-layered effect, intelligently recognizing faces in photos and cropping them to make the foreground subject stand out. The Photos app has also been redesigned on the WatchOS 8, now offers new ways to view and navigate collections, Memories and Featured Photos now sync with Apple Watch, and photos can be shared via Messages and Mail via the new card. built-in sharing on the watch.

WatchOS 8 makes communicating on Apple Watch even easier with new tools available in Messages. It is possible to combine the use of handwriting, dictation and emoji within the same message and, for dictated messages, there is the possibility to modify the transcribed text. To easily add even more personality to a message, you can enter a word or phrase and search for matching GIFs from hundreds of popular animated images to select the one to share.

WatchOS 8 brings the Contacts app to Apple Watch, allowing you to browse, add, edit and share contacts directly from the watch.

Messages and Contacts on WatchOS 8

WatchOS 8 supports Concentration (Focus)the new set of tools available in iOS 15 And iPadOS 15 to help reduce distractions by showing only important notifications. When a focus profile is activated on the iPhone or iPad, it is automatically synced to the Apple Watch. Focus uses the intelligence of the device to provide suggestions based on usage: for example, when starting a workout on the Apple Watch, the activation of the ‘fitness’ focus profile is suggested. 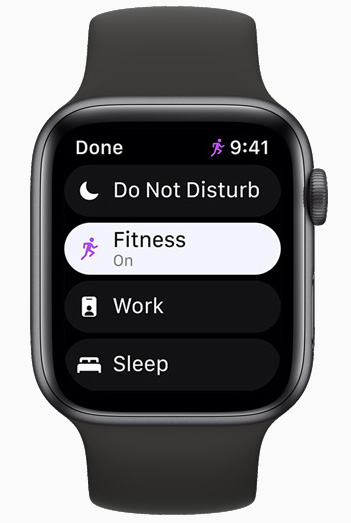 WatchOS 8 also introduces support for multiple timers on Apple Watch and they can be activated via a specific tag using Siri (such as “set laundry timer” or “import pasta timer”). In watchOS 8, more Apple apps support Always-On display, including Maps, Mindfulness, Now Playing, Phone, Podcast, Stopwatch, Timer, Voice Memos and more. Third-party apps can also be added to these, thanks to the new Always-On API now available for developers.

AssistiveTouch enables one-armed Apple Watch use by detecting simple hand gestures for interaction without touching the display. Using the built-in motion sensors, the watch allows you to answer incoming calls, control an on-screen motion pointer and display an action menu that allows access to the Notification Center, Control Center and more.

The app Apple Music has been redesigned on WatchOS 8, and now allows you to share songs, albums and playlists via Messages and Mail and listen to music and radio in one place. The app Weather forecast on WatchOS 8 supports adverse weather notifications, displaying government alerts on certain severe weather events; the app also provides alerts on the next hour’s precipitation and offers new complications. Family configuration (Family Setup) introduces the ability to add transportation cards in Hong Kong, Japan and select mainland China and US cities, while Calendar and Mail now offer the option to add a Google account.

Apple Fitness +, the first fitness service created entirely around the Apple Watch, expands its offering in watchOS 8 with Picture-in-Picture support and new filters, and now allows you to stop and resume an ongoing workout on any device. From the end of June 2021, a new series of workouts featuring Jeanette Jenkins and the new Artist Spotlight Series of workouts with entire playlists from Lady Gaga, Jennifer Lopez, Keith Urban and Alicia Keys will be available on Fitness +.

The first developer beta of watchOS 8 was made available to Apple developers at developer.apple.com on June 7. The first public beta was released in July on beta.apple.com. watchOS 8 is available to everyone since September 20 users as a free software update for Apple Watch Series 3 or later paired with an iPhone 6s or later with iOS 15. Some features may not be available in all regions, all languages, or on all devices.

Note: Not all watchOS8 features may be available as early as September 20th.