Apple at the event ‘Peek Performance‘which held on March 8, 2022 announced, in addition to iPhone SE 2022, iPad Air 2022, new colors for iPhone 13 Pro and iPhone 13 And new for Apple TV +also its new M1 Ultra chipset with UltraFusion packaging architecture that interconnects the die of two M1 Max chips to create a system on a chip (SoC) with superior performance and capacity. In addition, Apple unveiled the new desktop computer Mac Studio (with M1 Max or M1 Ultra chip depending on the configuration) and the new display Studio Display with 27 “Retina 5K display. These two new products join the Apple Mac line and can be ordered as early as March 8, with delivery starting Friday March 18. 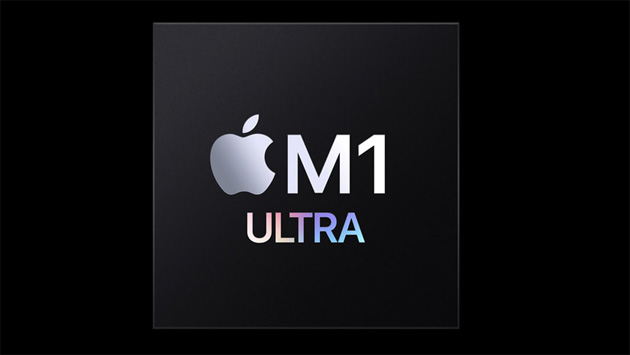 “The most common way to scale performance is to connect two chips via a motherboard, but this usually involves significant trade-offs, such as higher latency, lower bandwidth, and higher power consumption.” Apple explains in a note. “Apple UltraFusion uses a silicon interposer that connects chips on over 10,000 signals, delivering an impressive 2.5TB / s low latency inter-processor bandwidth, more than four times the bandwidth of leading interconnect technology. multi-chip. This allows the M1 Ultra to behave and be identified by the software as a single chip. ”

M1 Ultra has a 20-core CPU with 16 high-performance cores and four high-efficiency cores.

For more graphics-intensive needs, such as 3D rendering and complex image processing tasks, the M1 Ultra has a 64-core GPU, 8 times larger than that in the M1 chip.

At the graphics memory level, according to Apple, this chip can therefore support GPU-intensive workloads such as tasks with extreme 3D geometry and rendering of scenes with a multitude of details. M1 Ultra also has a 32-core Neural Engine capable of handling up to 22 trillion operations per second.

Double the capabilities of the media engine compared to the M1 Max chip ensures better performance for ProRes video encoding and decoding. According to Apple, the new Mac Studio with M1 Ultra can play up to 18 streams of ProRes 422 8K video.

Apple has introduced Apple chips in nearly every Mac in its current lineup, and every new chip (M1, M1 Pro, M1 Max and now M1 Ultra) has improved performance on Mac. M1 Ultra completes the M1 chip family and is the heart of the new Mac Studio, a powerful desktop computer with a compact design and plenty of ports for everything, with a modular system to create the configuration that best suits to your needs. Mac Studio is proposed in the version with the M1 Max chip and in the one with the new M1 Ultra.

Made from a single block of extruded aluminum, Mac Studio has a footprint of 19.7 cm x 19.7 cm and a height of 9.4 cm, takes up little space and fits easily under most displays. Internally it has a ventilation system with fans on two sides and air flow channels well positioned, and over 4,000 perforations on the back and bottom of the chassis that guide air through internal components and cool the chips.

Mac Studio with M1 Ultra can play 18 streams of 8K ProRes 422 video. Mac Studio can support unified graphics memory up to 64GB on systems with M1 Max chips and up to 128GB on those with M1 Ultra. The ports available are those of the most common useand: on the back of the Mac Studio are four Thunderbolt 4 ports, one 10Gb Ethernet port, two USB-A ports, one HDMI port and one professional audio jack for high-impedance headphones or external amplified speakers; On the front, Mac Studio offers two USB-C ports, supporting USB 3 at 10 Gb / s on the model with the M1 Max chip and Thunderbolt 4 at 40 Gb / s on the one with the M1 Ultra. There is also an SD card slot for easily importing photos and videos. Wi-Fi 6 and Bluetooth 5.0 technologies are also integrated.

Several monitors can be connected to the Mac Studio: up to four Pro Display XDR plus a 4K TV, for a total of nearly 90 million pixels. 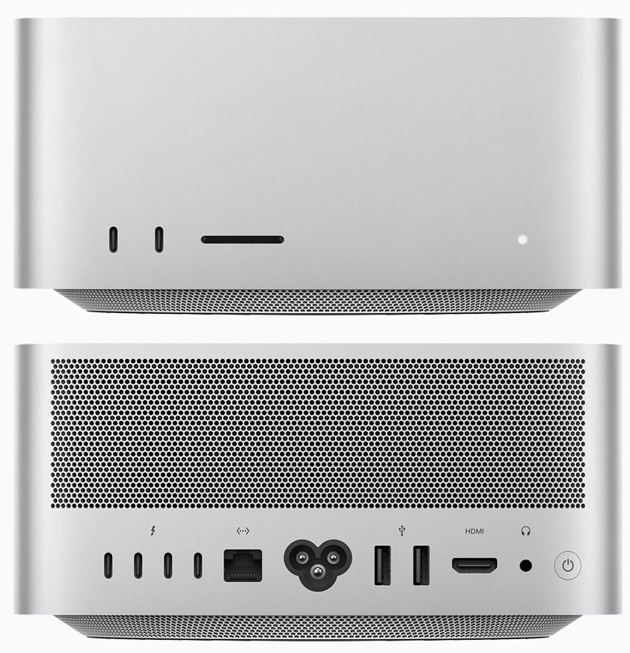 Studio Display is a 27-inch Retina 5K display with over 14.7 million pixels, 600 nits of brightness, wide P3 color gamut and support for over a billion colors. There True Tone technology automatically adjusts the color temperature of the display based on the ambient light, while the anti-reflective coating keeps reflectance low for better readability. An optional nanotexture glass is also available (first introduced by Apple on the Pro Display XDR) capable of diffusing light to minimize glare. Studio Display integrates the A13 Bionic chip it’s a 12MP camera with ultra-wide angle and Auto Framing (function that always keeps center stage during video calls) and three microphones in array, as well as six speakers (four force-canceling woofers and two high-performance tweeters) with support for spatial audio ( Dolby Atmos). All wrapped up in an all-screen aluminum design with thin edges. The integrated stand allows you to tilt the display up to 30 degrees. A tilt and height adjustable stand is also available, with a counterbalancing arm that allows you to comfortably adjust the monitor. An optional VESA adapter is also available, which can be used both vertically and horizontally, for added versatility.

Studio Display has three USB-C ports that allow transfers of up to 10 Gb / s to connect peripherals, storage drives and high-speed network devices directly to the display. A Thunderbolt port allows you to connect both Studio Display and other peripherals connected to the Mac via a single cable. The same cable can also supply 96W of power to a Mac notebook, for example to quickly charge a 14 “MacBook Pro. Plus, you can connect up to three Studio Displays to a single MacBook Pro to create a powerful editing room or station for animations.

The Studio Display can be combined – sold separately – with the Magic Keyboard with Touch ID, Magic Trackpad and Magic Mouse.

Studio Display also offers a tilt and height adjustable stand, with a counterbalancing arm that allows you to adjust the monitor
Studio Display has 12MP ultra wide angle front camera and support for Auto Framing function, ideal for video calls

Apple offers Mac Studio and Studio Display from 8 March 2022 on apple.com/it/store and through the Apple Store app with deliveries expected from Friday 18 March, the day in which the availability of products is also expected in some Apple Apple Store and Authorized Resellers. Mac Studio is on sale starting at 2,349 euros, while Studio Display is on sale for 1,799 euros. Further configuration options are available on apple.com/it/store, where you can also find Magic Keyboard with Touch ID and numeric keypad (for 205 euros), Magic Trackpad (for 155 euros) and Magic Mouse (for 109 euros) in the new silver and black version. With Apple Trade In, you can trade in your computer in exchange for credit for the purchase of a new Mac Studio. To find out the value of your device, you can visit apple.com/uk/trade-in.